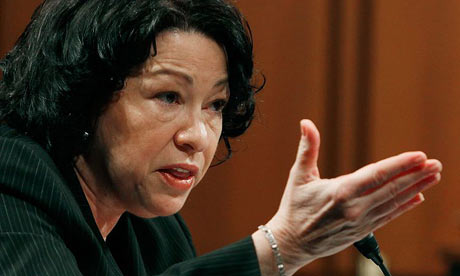 I know I’m coming late to this (hey, whaddaya want: I’m on vacation!), but as everyone knows by now, the US Senate yesterday confirmed Sonia Sotomayor to be the 111th Supreme Court Justice of the United States. Nobody – including the Republicans – finds this a particularly large surprise, given Sotomayor’s even temperament and unparalleled-in-70+-years record. But Sotomayor is only the third woman ever confirmed to the nation’s highest court, and the very first Latina. Three (small) cheers for progress. Why small? Because as wonderful as this news is in terms of its social significance, there’s still quite a ways to go. When the day dawns that even Pat Buchanan says he longs for: when people truly have equality of opportunity, and candidates for even so exalted a position as the one Sonia Sotomayor was chosen for are all selected by virtue of their qualifications ONLY, then the court – as well as the Senate that confirms Justices – will both look like the rest of the country they represent.

But for today, a somewhat-belated raising of the glass to Justice Sonia Sotomayor! Congratulations!